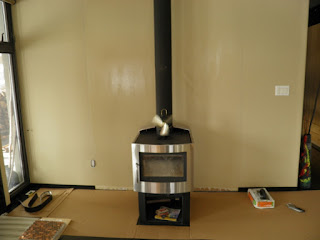 When we built our home 7 years ago it was always with the intention of tiling behind our wood stove but tile is pricey and we just never got around to doing it. Then Pinterest arrived in my life (Yeah!Pinterest) and I saw a floor done with penny tile last summer and I knew that I had to have a penny wall. We used their technique to do our wall.  You can see their post at: (http://big-design.blogspot.ca/2011/01/penny-saved-is-tile-floor.html ).  Canada had announced their intent to phase out the penny so it was perfect timing to make a monument to the penny.  Let me say that this is not a weekend DIY or one for the faint of heart at least not on the scale we did it, but it is one of the cheapest ways to tile a wall – it costs pennies!  There was a major investment of time and in our case, muscle power (more of that later).   We started collecting pennies last summer by inviting our friends and family to bring their pennies to us for cash but instead they all donated almost 9,000 pennies to the wall! Thank you to all of you! We bought another 10,000 and we had a few thousand of our own.  We decided on not doing the entire wall but instead, doing a 6’wide strip behind the stove and taking it up 16’ to the roof line – yep I said 16’. We found a tile place where we could buy a roll of 1’wide fibreglass mesh and then we had to decide on glue.  Glues to attach metal were expensive and reviews suggested the smell lingered forever so we opted for using silicone – the kind you use in your bathroom or kitchen - to attach the pennies to the mesh.  I tried to research if silicone would stick with the tile thin -set and could not find anything concrete so we went ahead hopeful that it would all work out. 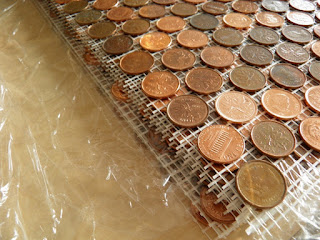 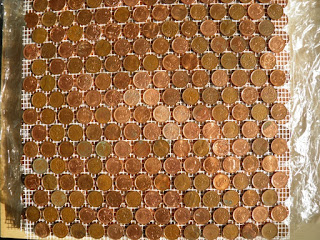 In October I went on the computer and found http://incompetech.com/graphpaper/circle/ to print circles the size of pennies on paper.   I used 2cm (the size of pennies) for the grid size and a radius of .9 to give the spacing for the grout.   I printed quite a few sheets and cut and joined sheets together to make 4 one square foot templates (so we could make 4 tiles at a time).  We put the templates on a table with a sheet of plexi-glass from an old picture frame over them. Then we put down a piece of plastic wrap to keep the silicone off the plexi-glass and to keep the tiles from sticking together as we piled them up. Finally, the square foot of mesh was put down and we lined up corners and started attaching pennies. Jerry did all of the tiles starting in October, doing one or two a night and having about 9’ of tile ready by the end of December. He wore a spot in the floor he spent so much time doing those tiles!  Each tile took 224 pennies and we chose to do things completely random, heads, tails, US, Canadian, old, new, even damaged and painted. Our oldest penny that we could see a date on is from 1920. 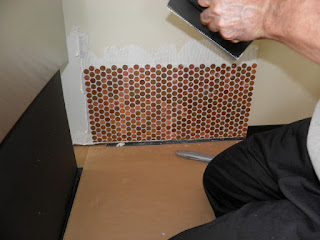 New Years Eve Day we attached 9’of tile – we had been waiting for a day that would be sunny enough not to have the wood stove on (our main source of heat).  The actual tiling was pretty easy.  Only a very thin coat of thin set was possible as the pennies are so thin and we needed to leave room for grouting.  Each foot of tile required us to attach pennies one at a time to fill in the “half-row” at the top of the tile. 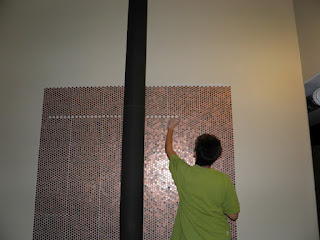 The silicone did not seem to present a problem and only a few pennies fell off the mesh while we were attaching them to the wall.  It was pretty easy to re-attach any with a bit of thin-set on the penny and then stick it to the wall.  Next morning they were all still there on the wall.  We were thrilled it had worked.  Jerry went back to making tiles and we had the next 7’ ready to go a few weeks later.  Our roof line is sloped behind the stove so the last tiles had to be made up as we tiled once we could measure and cut the mesh on the angle to fit.  The wall took approx 19,500 pennies - we spent only $100 on pennies, $75 on the mesh, and about $70 on the grout and thin-set - we used the standard stuff from Home Depot. Add the costs of trim, plastic wrap and silicone and we spent approximately $300 to tile a 16'x 6' area. 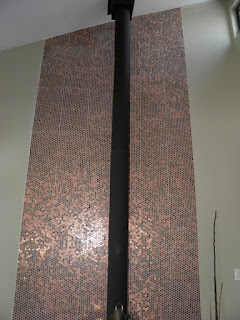 We painted and attached a thin trim down each side and across the top and we were ready to grout.  We knew that the grouting would be challenging, grouting regular tile is hard work and pennies are not smooth.  It was apparent very quickly that Jerry was not able to pull a lot of the grout back off the pennies because it caught in the minuscule edges of the pennies.  I tried taking the grout off with sponges and lots of water as you would normally do but then I was losing the grout in between and there was not much of that because the pennies are pretty thin.  It would have taken huge amounts of water that we could not put down the septic system and it all seemed terribly wasteful.  So we made the decision to let it all dry for a day which meant that we then had to remove the dry grout from more than 50% of the pennies with damp cloths and screwdrivers, paint scrapers one penny at a time and most of the work while we were on ladders 16' up! 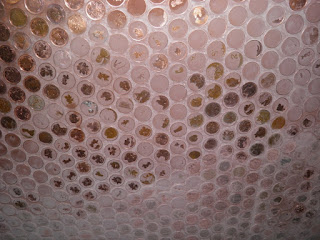 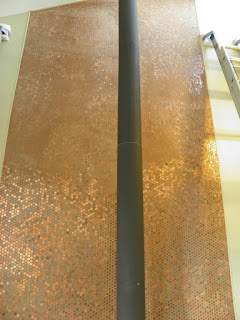 The first day we cleared a couple of square feet and I was pretty discouraged.  I avoided looking at the rest of the wall.  But a new day dawns and you find your groove with cleaning, some areas were easier than others, we had the tunes blasting and there were two of us working on it.  After about 40 hours of scraping the wall over two weeks it was finally done. All told we figure it took about 100 hours of work for the whole job. 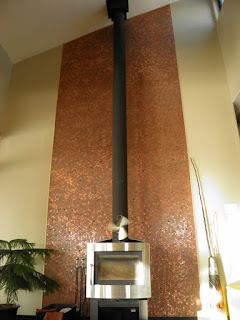 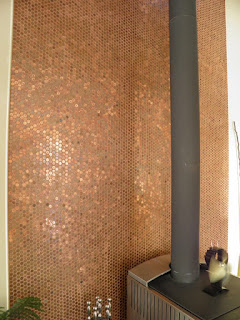 It was soooo worth all the work!  I love the glow of the coppery colour, the variation of the tones in the wall. I love the way the light makes it sparkle in some areas.  The pics do not do it justice - really it looks so much better than these pics!

Thanks again to all our friends and family - can't wait for you all to come and see your pennies!
Posted by ellen at 10:18 AM