Invasion of the Japanese...

Beetles, that is.  We have been hit hard this year.  Four years ago we had never seen a Japanese Beetle but now they have become a permanent, and growing fixture every summer.  Apparently, they were introduced in Canada back in 1939 in Nova Scotia and have been claiming territory ever since.  There are 300 plants on the adults menu and almost everything we have planted is a favorite.  Our linden trees, gooseberries, raspberries, currants, plums, all the fruit trees, grapes, and this year they found our sweet potato plants.  I’ve spoke with friends in the community who have them eating their basil, tomatoes, beans, and other veggies.  So far, we are lucky that they have not headed into the veggie gardens other than the sweet potatoes. 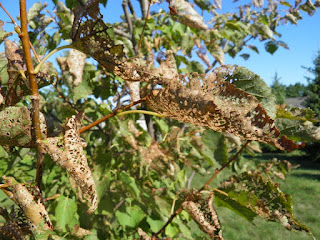 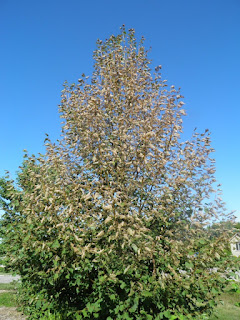 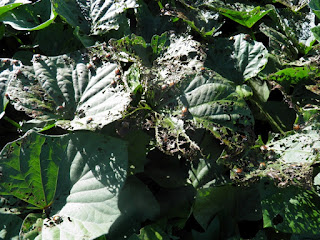 The last couple of years Jerry  spent hours picking them from the trees and shrubs but the sheer numbers this year on the sweet potatoes necessitated a declaration of war.  We went and bought two of the traps.  There is a great debate online about whether the traps bring more beetles to your property or not.  Ideally, you would want to install them on your neighbours’ property (haha) hoping that the beetles head there instead.  In our case, we are the only property on the street that has extensive gardens so the beetles are all here anyway so we might as well try to limit some of their mating and egg laying. 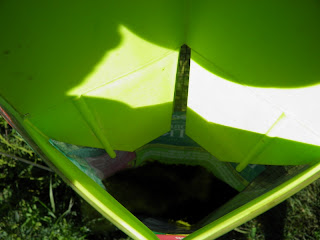 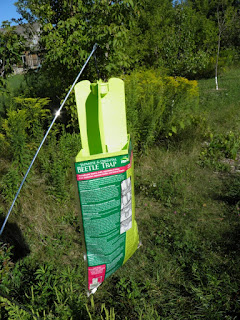 The beetles have a one year life cycle where the adult emerges from the lawn in June/ July/August, they find plants to feed on, mate,  then drop down to the grass and lay eggs, then head back up to mate and feed again.  One female can lay about 50 eggs a season so you can see how fast the population can explode. The adults all die at the end of the season. The eggs in the grass hatch to become grubs, big white ugly grubs that then eat the roots of your lawn (that is why our wonderful Ecolawn in the back has been dying off on us in large ugly brown patches).  The grubs overwinter in the soil, then pupate and emerge as an adult the next summer. 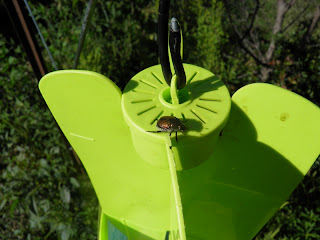 By not buying the traps until just a few weeks ago I think we are in for an even bigger infestation next year but we are certainly killing thousands of the beetles.  We have large putrid smelling buckets of beetles and soapy water sitting around making sure they are dead before dumping.  The traps need to be emptied daily of the mass of beetles that are attracted to it.  Still the plants are covered with beetles. 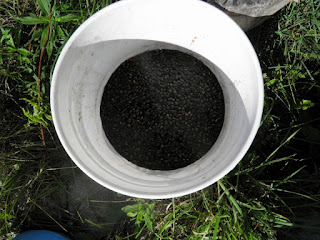 With no predators here in Canada and ideal weather conditions the Japanese Beetle is one more story on how introducing a species from another country can wreak havoc on our own natural systems.  With the cooler temperatures the adults are almost gone for the season but in my head I can hear the chewing of all those baby grubs in the lawn...
Posted by ellen at 8:09 PM No comments: