Birding is all about timing - this morning we had decided to do some local trails and at the last minute decided we better have some breakfast first.  I looked out the window while waiting for my toast and saw a warbler, we grabbed books and binoculars and quickly realized there were two different types of warblers right out our window.  We got a few pics and identified both as a Western Palm Warbler and a possible Pine Warbler (which was confirmed by a fellow birder).

Both of these birds are lifers for us so we were pretty excited and had a good laugh that we had decided to make toast.  Instead of heading out to the trail we decided to walk through a landlocked conservation area across the field from our home.  As we headed out we saw another warbler - this time the Yellow-rumped Warbler which we have seen before but still counts as a bird on our 2013 list. Our list for 2013 - recording all species we see was now at 98 birds - we quickly saw a Green Heron taking us to 99.  We walked a bit through what is a planted pine forest and stopped at a large pond and our 100th bird appeared - the Pilated Woodpecker!  It flew across the pond and we managed to get a very fuzzy pic of it a bit later. Shortly after we saw some more warblers and we both identified one as the Black-throated Green Warbler bringing our list for 2013 to 101 birds.  Our life list is now at 214, our backyard list is 82 and we have found 26 lifers since January 1 2013.
Last week we spent a day down at Long Point adding 16 birds to our list and had another lesson is the role timing plays.  We had stopped at the Bird Studies Canada building around 8:30 but decided rather than get out and walk the trail we would head to Long Point and do that on our way home.  Around 9 another birder saw the American Avocet at the edge of the lake.  It is not a lifer for us - we have seen it in Myrtle Beach but it would have been a nice bird for our year list.  Of course, had we made that stop we might not have seen these highlights - the Blue-winged Teal which we had been "chasing" since January and always seemed to miss. 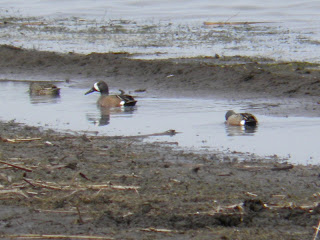 the usually elusive, secretive American Woodcock preening beside a wetland 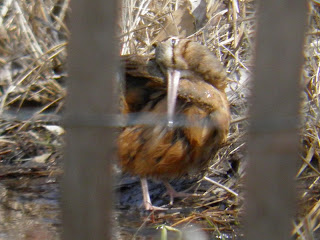 and we finished the day spotting this Horned Grebe in almost breeding plumage. 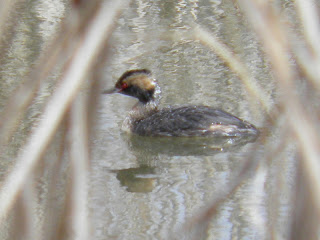