On Friday someone sighted a Western Kingbird in Hamilton.  It was not found on Saturday but we took a chance and headed to the area today.  We were not really expecting to see it, we had just spent 4 hours on a Shorebird trip and had seen some good birds with a couple of lifers thrown in.  It had been a good birding day and it was warm and about 1:00.  Jerry had just commented that it was a "bad time of day" to see anything.  Suddenly to my right I saw a flash of yellow and a large bird fly into a tree - with the bins I knew it was not the Kingbird - tufted head, quite grey/olive, almost the size of a robin, wing pattern of a flycatcher, dark beak, yellow belly.  We both got good looks at it and watched it fly away.  We confirmed it as a Great Crested Flycatcher!  Not a lifer for us but a first in Ontario and one needed for the list this year.  Jerry realized that he had once again come out of the car without the camera so he went back to get it.  We walked a bit farther down and again another bird caught my eye - yellow again, grey head, I got Jerry to start taking pics, then realized it was with an Eastern Kingbird and it definitely looked like the Western Kingbird!  Not a lifer for us as we saw them out West, in Alberta, where they belong but a very nice bird for our list this year.  Pics are below... The Western Kingbird I think is pretty rare for Ontario - there was one in Downsview a few weeks back.  I have posted directions to the bird on Hamilton Birds, Brant Birds and Ontario Birds. 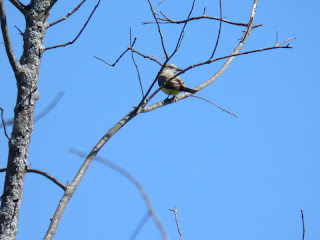 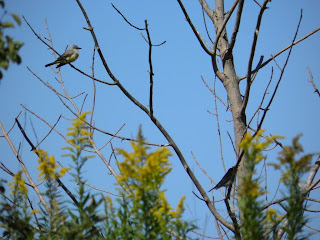 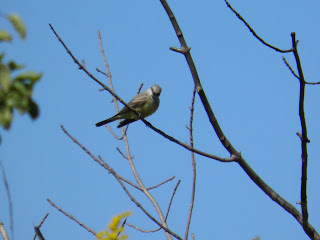