When we set out on January 1 2013 to record all species of birds we saw in Ontario this year we had no idea how many we might see and while we jokingly referred to the year as a "Big Year" we had no intentions of making a run at the record of 345. We like birds and we like the challenge and the "high" when we see a bird and then are able to identify it, especially one we have not seen before. We were also happy to get back out on trails and hikes and re-connect with the nature around us.  It was the reason we set the goal in the first place. We met some great birding people on hikes and birding outings put on by the Hamilton Naturalists Club and the Ontario Field Ornithologists and have enjoyed being on numerous birding lists to hear what others are finding and seeing.  We did not chase many of the rarities unless we were already in the area - so no 2 hour drive to Fort Erie to see the Brown Booby or the Elegant Tern, no 4 hour drive to Kingston to see the Murre.  But we were lucky enough to see some great birds just being in the right place at the right time: the Worm-eating Warbler at Point Pelee, re-finding the Western Kingbird in Hamilton, the Burlington Fish Crow hours before it was killed by crows, the Lark Sparrow in Fort Erie just because we were down for the OFO Gull Trip where we saw the beautiful Black-legged Kittiwake as well.  So here we are at year end and we have managed to see 210 species this year with 81 being "lifers".  I imagine that the number is probably what most dedicated birders see in any given year.  We were not out daily, nor did we leave Southern Ontario to bird, still to consider the small geographic area we visited, 210 birds is pretty good.  Our goal was 200 and when we surpassed that by 10 we were more than satisfied but...it is Dec 31 and tomorrow is 2014 and we just might be found tomorrow along Lake Ontario starting next year's list - we have a few trips planned in North America so we may just be seeing how many we can put on a North American list....Happy New Year and Good Birding! 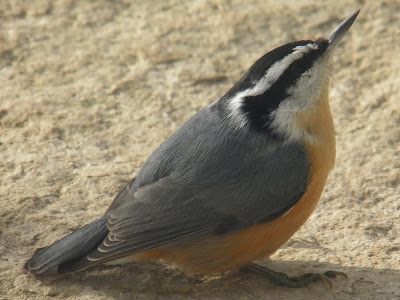